Founded by Glynis Brewster, the CariBreeze Wellness Spa, home of the Caribbean’s first Halotherapy room, was established to provide a total wellness center in Trinidad and Tobago. A registered nurse with over thirty years experience in health care, Glynis has an unparalleled enthusiasm for seeing and helping people achieve their very best by empowering them in body, mind and spirit. As a main part of her wellness spa she has innovatively instituted Halothearpy, a non-intrusive, natural treatment for various respiratory illnesses as well as other diseases.

Tell us about your company Caribreeze Wellness Spa Ltd?


“Caribreeze is a wellness spa geared towards the potential health and wellness of the client. We provide health education, coaching and dietary supplements to achieve your optimum health. Apart from Halotherapy we are also independent distributors of Herbalife and offer other products and services which positively impact holistic health”


Why Halotherapy as part of your services?


“I have always been interested in health. Over the years my studies and practice have focused mainly on preventative health care and from this I became interested in alternative remedies. It was while visiting the UK in 2010, a colleague told me about halo (salt) therapy so we decided to try it. My friend, my granddaughter and I did the session together. At first I was skeptical because I felt absolutely nothing, but it was when my friend, who is a smoker, said she was feeling a sensation at the back of her throat I also noted that my young granddaughter developed a runny nose. It wasn’t until just about two hours after my session I felt a dull sensation in my chest soon after which I started to feel mucus in my lungs. I realized at that time the therapy had a very positive effect on my respiratory system. It was like a cleansing and my breathing was positively affected. My friend and my grand daughter also had very positive results which inspired me to immediately begin researching more about the process and its benefits. I felt this was definitely a process needed in the Caribbean”


What type of illnesses does Halotherapy treat?


“Mainly respiratory illnesses. Salt therapy has been clinically proven to bring significant relief from symptoms of various illnesses without the use of drugs. These illnesses include allergies, sinusitis, bronchitis, asthmas, common cold, COPD, cystic fibrosis, and even stress.  Paediatric asthma cases in different countries have seen a high success rate using Halotherapy. After 1 or 2 yrs many children have been taken off large doses of inhalers and steroids.  Children and adults alike respond quickly to the complimentary therapy, and whether  the child is suffering from allergies, asthma or any kind of infection, Salt Therapy assists in reducing inflammation, opening passageways, alleviating tightness of the chest, loosening mucus and killing bacteria.


Explain more of the procedures and science behind Halotherapy?
Usually by referrals, clients can book their appointment at the spa between Monday to Saturday, 6am to 8pm. Once at the spa, clients are interviewed specifically about their health history and lifestyle and what are their aspirations. The procedure is very simple, you enter the salt room and make yourself comfortable. While you relax and breathe naturally the micro-climate clears and cleanses the respiratory system. Positive ions are converted to negative ions which strengthens the immune system.  There are no microbes or allergens so the immune system gets a chance to rest. After this the defenses begin to work alone.  Many of our problems start when the immune system breaks down and because we are exposed to so much pollution it is ever more important to clean the lungs in order to avoid developing asthma or terminal illnesses. Pulmonary Critical Care physicians have explained that while Halotherapy does not replace conventional medicine the ‘Salt therapy acts as an anti oxidant reducing inflammation in the airways’.


Halotherapy is derived from speleotherapy - the treatment in the natural salt caves, mined for rock salt. These salt deposits were formed as horizontal salt beds in ancient oceans and were later buried deeply beneath sediments as mountains eroded. Although virtually unknown in North America, Speleotherapy has been practiced in salt caves of Eastern and Central Europe for over 150 years. During the late 18th century the doctors noticed that the workers of salt mining industry never suffered from bronchial or lung diseases, which they realized was due to high salt aerosol content in the mines. In a modern version of this ancient therapy halogenerators are being used in a controlled environment to offer the benefits of the natural deposits found in rock salt. These minerals when concentrated in an enclosed area with stable air temperature, humidity and the absence of airborne pollutants, offer tremendous relief to the respiratory system. These salt particles are then small enough to penetrate deep into the lung tissue.


“I suffer with chronic bronchitis and got the cold in July 2011 I have been on a lot of medication since. A friend offered to take me to Caribreeze to try the treatment so I did. I immediately felt an improvement in my breathing, and my sinuses were clearing up. After the first day my body was basically rejecting mucus from my lungs, stomach and nasal passages. I can honestly say that I am breathing at least 95% better than I was before.”


“I suffer with asthma and serious sinus problems, most mornings I wake up coughing. I heard of Caribreeze and I decided to try a session. During the treatment I felt relaxed but felt a light scratching at the back of my throat. After the first session I found that my breathing had improved and shortly after started experiencing a runny nose and coughing up mucus. After that I found I had no cold or sinus issues and I am singing much better as my breathing is better as well.”


“I do construction and painting. I had to work on a concrete project demolishing a floor one day. That night I couldn’t sleep because I was extremely stuffy and had difficulty breathing. I went to Caribreeze for my first session and was somewhat skeptical. As I sat in the room I had no clue that I was being treated. That night I slept uninterruptedly and after two days I realize that I was breathing much better. I am truly amazed and will be going back, will definitely recommend it to anyone.”

Posted by IIRIS™ Salt Therapy at 8:48 AM No comments:

Halotherapy is a therapeutic method and has a number of beneficial effects on organ systems, particularly on respiratory system through inhaling the dry salt aerosol in salt room which is copies the conditions in natural salt caves. The conditions in the salt room are controlled - the air temperature is 18-24 C, humidity 40% -60%, the average particle size of salt 2-5um, the air is free of allergens, salt concentration 0.5 mg/m3 and higher.
It is a complementary therapy, numerous studies have proven its effectivness, it isn't harmful, and the costs of treatment are acceptable. Unfortunately, this method of treatment is undeservedly in the shadow of medication therapies.

In recent decades, numerous scientific articles were written that prove the effectiveness of halotherapy on respiratory diseases.
Parents are interested in this form of therapy when it comes to their children, since it is a method of treatment which has a small number of contraindications and side effects, and for children it causes no traumas. From our experience, most patients are children of kindergarten age. Halotherapy is effective on infants, especially in eliminating the accumulated mucus in the upper airways, during the banal respiratory infection. Due to specificity of infancy we advise a great caution and make sure to review the child and have good cooperation with the personal physician before you begin halotherapy. Constant medical supervision is required which is why it is necessary that in this instance, salt rooms are operated by the medically trained personnel. To achieve a therapeutic effect we suggest 15-20 treatments (certainly not less than 10). After the first few treatments there may be an initial worsening of symptoms in terms of intense coughing, wheezing that is in most cases, the expected transient response after reaching the elimination of secretions from the respiratory tract and does not require interruption of therapy. 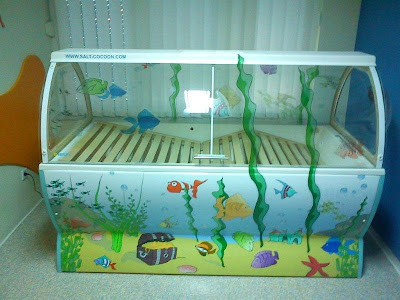 Approach to the patient should be individual, in this sense that the salt aerosol concentration, frequency, length of treatment depends on age, types of disease and response of the individual.
In Croatia halotherapy is still in the private domain and therefore is not recognized and supported by a doctor in true sense.

Children's Policlinic in Zagreb in cooperation with the manufacturer of halogenerators IIRIS from Estonia and regional representative of IIRIS halogenerators from Samobor, Natalis Samobor Ltd and Natalis salt room plans to conduct a controlled halotherapy with medical monitoring of their patients and clients. This will show the effects of halotherapy on children with asthma, bronchitis, frequent respiratory infections and atopic dermatitis.

Our wish is that this natural method for complementary treatment and rehabilitation is carried out under controlled standardized conditions with medical supervision, and thus takes its rightful place. Following the example of Estonia, Russia and Canada we want that halotherapy finds its place in Health care system in Croatia!